The Spring 2015 edition of Horizon is out! Check out the feature story below and read the full edition online at www.huntingtonsociety.ca/horizon/. 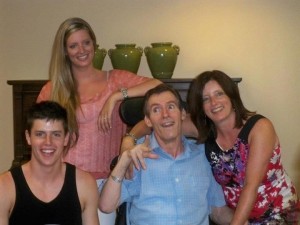 Supporting the Huntington Society of Canada (HSC) has always been a family affair for the Carmichaels.

Peggy and her husband, Steven, were high school sweethearts who married in 1987, both in their early twenties. Two children soon followed: Brittany in 1990, and Brad in 1992.

Steven’s HD symptoms began to progress rapidly after Brad’s birth. But as daughter Brittany says, “He didn’t let the Huntington’s stop him.”

Steven began fundraising within their church community, raising both money and awareness for the disease. The rest of his family soon joined in.

Nearly two decades later, Brittany and Brad attended the 2012 HSC National Conference where they learned about Young People Affected by Huntington Disease (YPAHD). “I was nervous about them attending at first,” admits Peggy, “But they came home so uplifted.”

For Brittany and Brad, the conference was an eye-opening experience. Having a loved one with HD can feel isolating but suddenly they were connected to a national network of support. YPAHD provides a community for young people affected by HD, in addition to increasing public awareness and raising funds to deliver services and further research.

Brad signed on to the executive of YPAHD, while Brittany was invited to participate in the pilot of HSC’s new Youth Mentorship Program. She flew to Toronto, where she and other young adults completed a training program that equipped them to provide valuable support to a young person from an HD family at critical points in his or her life. She was then matched with a younger mentee.

“I think it would have been helpful for that kind of thing to have been available when the kids were younger,” says Peggy. “It’s really great to get the young people involved.”

Brittany also became an outspoken advocate for genetic fairness and continued to speak out against genetic discrimination after Steven passed away in March 2014.

Visiting her father in care each week, she says she was constantly reminded of her own 50 per cent chance of inheriting the disease. But while she may not know what the future holds, she is determined not to let her life be ruled by uncertainty.

The Carmichael family has truly come together as activists for the HD community, and HSC is very thankful for their tremendous involvement in fundraising and youth programs.

When asked how she’s feeling about moving forward in 2015, Peggy is optimistic. “There is so much hope now,” she says. “It’s a really exciting time for the community.”

The Carmichael family has agreed to participate as spokespeople for the Huntington Society of Canada in 2015. More about how the Carmichaels are making a difference will be featured in a variety of publications, as well as through the Society’s annual fundraising campaigns. To learn more about how the Huntington Society of Canada makes a difference across Canada and to support our efforts, please visit www.huntingtonsociety.ca.