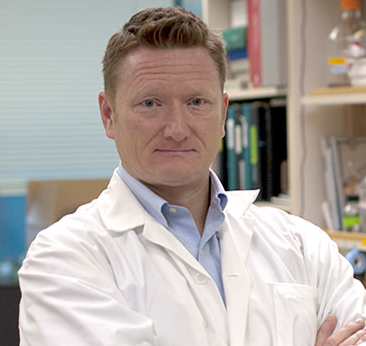 Now, thanks to a three-year $950,000 grant from the Huntington Society of Canada and Brain Canada, Dr. Blair Leavitt and his team can advance research into gene-silencing. According to the University of British Columbia’s Dr. Blair Leavitt, gene-silencing (otherwise known as huntingtin lowering therapy) offers a promising way to slow or stop Huntington disease (HD). By using anti-sense oligonucleotides (ASOs) to prevent the HD gene from producing huntingtin protein, this approach targets the disease right at its root.

Dr. Leavitt has been involved in IONIS-HTTRx, the Phase I/IIa clinical trials that are testing ASOs in humans. The initial results of the trial shows dose-dependent reductions of mHTT were observed in participants treated with IONIS-HTTRx.

“ASOs are incredibly effective,” he says. “If you can get them to the correct cell, they work very well.” The trick is getting them where they need to go. The IONIS trial used intra-thecal injections to deliver ASOs into the cerebrospinal fluid that bathes the spinal cord and the brain. However, animal studies suggest that when researchers use this approach, not as much of the ASOs reach the deep brain structures that are most affected by HD.

So, while clinical trials in humans continue, Dr. Leavitt is already looking for more effective delivery methods. “We have brought something all the way from the test tube to the patient,” he says. “Now we are going back to the lab and saying, ‘How can we make this more efficient? How can we make this better?’”

He hopes to answer that question with a $950,000 grant from the Huntington Society of Canada and the Brain Canada Foundation.

The ambitious project brings together world-class researchers from three different institutions to assess the feasibility of injecting ASOs into the bloodstream; it’s being done in close collaboration with Dr. Michael Hayden, the Hayden lab, and his colleagues who pioneered pre-clinical work that contributed significantly to the use of ASOs for gene silencing in HD.

Because blood vessels wind their way throughout the brain, this approach could potentially reach deep brain structures better than spinal injections and be less invasive for the patient.

However, the investigators must overcome two major problems to make blood-borne delivery work. One, ASOs tend to break down in the bloodstream. Two, the brain is protected by a special barrier that stops just about everything except sugar and oxygen from moving from the blood into the brain.

That is where two scientists from the National Research Council of Canada (NRC) come in. Dr. Danica Stanimirovic and Dr. Abedelnasser Abulrob are world-renowned experts at developing nanocarriers that can transport drugs across this bloodbrain barrier. As part of the project, the pair will be engineering several different carriers specifically designed to deliver ASOs.

They will start with a lipid capsule that encloses the ASOs, preventing them from breaking down in the bloodstream. Next, they will attach antibody fragments that act as a security pass, letting the capsule (and its contents) pass through the barrier. Once it reaches the other side, the lipid capsule will merge with brain cell membranes, releasing the ASOs directly into the cell.

If all this unfolds as the researchers hope, it will represent a major milestone for Huntington disease therapy, Dr. Abulrob says.

He and Dr. Stanimirovic will send the most promising versions of their nano-carrier to UBC in Vancouver, where Dr. Leavitt and the UBC team will test them in mice, and to the Oregon Health and Science University in Portland, where Dr. Jodi McBride will test them in larger animal models.

Drs. Leavitt and McBride will examine several different things: which type of carrier works best, how much of the drug reaches the target areas of the brain and whether injecting ASOs into the bloodstream is more effective than injecting them into the cerebrospinal fluid.

The final phase of the research project focuses on biomarkers. Research suggests that the level of huntingtin protein in the cerebrospinal fluid reflects huntingtin levels in brain cells. Dr. Leavitt will fine-tune ways to measure these levels.

He and Dr. McBride will then compare them with ASO penetration and Huntington disease symptoms in their animal models, creating a more sensitive and accurate way to assess whether gene-silencing therapy is working.

“I am really excited to be a part of this project. It is the quintessential example of bringing together people who have amazing expertise,” says Dr. McBride. “It is going to be quite a powerful collaboration.”

The results will help enhance the effectiveness of ASOs, taking a promising therapy for HD and making it even better. Potentially, it could also pave the way for treatments of other genetic brain diseases, including specific types of epilepsy, Parkinson’s and Alzheimer’s.

“If we succeed in demonstrating that we can do this, that has the potential to open up the field tremendously,” says Dr. Stanimirovic.