The Huntington Society of Canada (HSC) supports an amazing program that brings youth from all over the country together. Young People Affected by Huntington Disease (YPAHD) is our national, virtual youth chapter that gives youth aged 14-35, who are affected by Huntington disease (HD), a community and support network to connect. It allows young people to relate to, lean on and talk to others who are facing the same situation. YPAHD Day occurs on an annual basis and gives youth all over Canada the chance to connect and come together in a major Canadian city, to take part in some fun activities. YPAHD Days are one day conferences that are created by youth for youth.

Every year, HSC offers funding opportunities for two YPAHD members to attend NYA Day (National Youth Alliance or NYA is the US counterpart of YPAHD). This year, Catherine and Celine were selected. Below, Celine shares her experience. 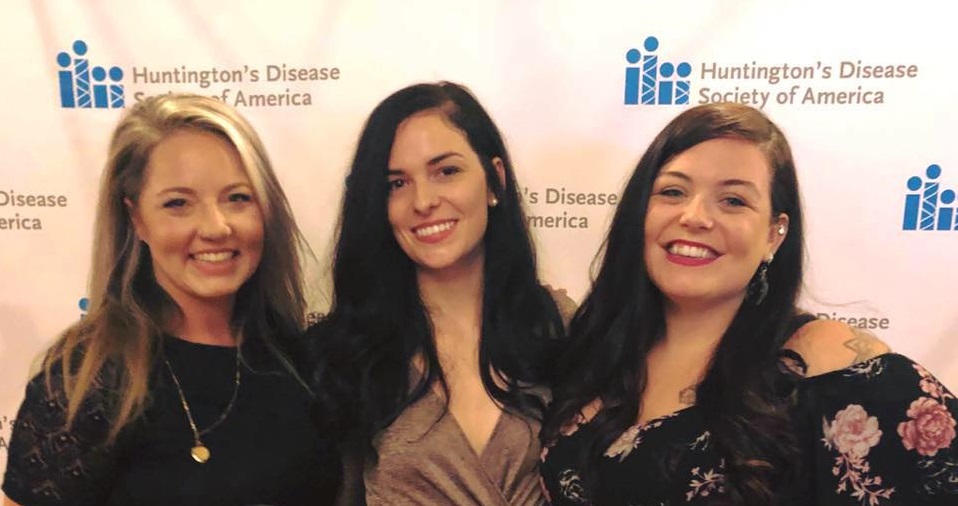 For the first time, I had the privilege of spending three amazing days with so many different amazing people while in Los Angeles for the HDSA convention. The first day was mainly for the National Youth Alliance (NYA) members to get to know one another and for the members of the board to introduce themselves. It was filled with information and ice breakers. The members of the board introduced themselves and talked about several things that they are currently working on such as fundraising, acting as an advocate and implementing the parity act, which was an act they were trying to present to the Senate and Congress to get free health care services to those affected by Huntington disease (HD) enforced. They also did several ice breakers which included a “buddy system” where everyone was given a number upon entry and had to find the other person with their matching number and that person acted as a person that they can go to if they need anything throughout the convention. At the end of the day we were all separated into groups of topics that were voted for in the morning and chose the table with the topic that we wanted to listen to or talk about. There were topics like; caregiving, grief/loss, testing and more. We were finished for the day around dinner time which gave everyone some time to mingle and explore the city.

The second day was a full day of information sessions and introductions. There were many different sessions with different speakers at each that you could choose from. There were about 7 or more different topics such as “Caregiver Life Hacks”, “Family Dynamics”, “HD Activity Centre for Persons with HD” and many more, running all at the same time therefore you could choose one that you wanted to attend and they ran for about an hour each. In the morning, I chose to attend the “Swallowing” session with Kiera Berggren a Speech Pathologist who spoke about speech and swallowing difficulties in people who have HD. I chose this topic because it related to me the most due to my mother who has HD being in that stage of her disease. It was very informative although I do wish she would have spoken more about the feeding tube but that being said she did leave her email address in order to contact her at any time. On our lunch break we had a “Galaxy of Heroes” lunch theme where we were provided with a nice pasta dish and a large gold star and were told to decorate the star as we wish and that 5 would be chosen to win a $100 gift card prize. After lunch there were different topics of discussion to choose from. I chose to attend the “Ask the Scientist…Anything!” session where we were able to ask Dr. Jeff Carroll and Dr. Ed Wild anything that we would like. This session was great because not only are these Doctors amazing personalities but the audience came up with some awesome questions regarding current research and what to expect. After this session we were able to attend a different topic which I chose the “DNA Repair and Stem Cells” session which had Dr. Tamara Mauri and Dr. Sarah Hernandez speaking about their findings on the topic. For dinner, we were provided with the choice of 3 different food trucks which consisted of tacos, burgers and BBQ. At 7PM, there was an NYA talent show and “dance auction” which was great to see so many people getting out of their comfort zone. Throughout the day they also had a silent auction, raffle and several concessions stands filled with different information and resources regarding HD. They also had NYA T-shirts available and everyone was encouraged to get one and wear it during the talent show and were told that for every shirt worn the Doctor/Scientists would donate a dollar. They raised over $9,000 just for wearing a shirt.

The third day was filled with research information. The morning consisted of the research forum or “story” that had many speakers including a panel of doctors, researchers, scientists and an HD family member. They each spoke about their contribution to developing the drug that will lower the “huntingtin protein” in patients who have the huntingtin gene. This information session was very informative and gave even more hope for the future free of HD. After a brief break they had Dr. Carroll and Dr. Wild speak in more detail about lowering the huntingtin protein and the benefits of their recent trial. For lunch the NYA members had a separate location which consisted of a taco buffet and an awards ceremony for the members of NYA. This was great because as YPAHD members we got to see how close everyone on the NYA team is and how desperately needed this particular program is. Like YPAHD, they help youth affected by HD find some sort of peace within the HD community by connecting with others who truly understand what we are going through and connect us with people who will help any one of us get more involved in anything we want to such as fundraising and advocating. After lunch they held more sessions which were set up like the previous day. I chose to attend the session about “Relationships and HD: From Perspective of Person with HD”. This was great because they had 3 speakers who have the HD gene talk about the testing process, how they felt, how they talk to their loved ones and what brought them to HDSA and NYA and we were also able to ask questions afterward. When that session was over I stayed to attend the session about “Relationships and HD from the Unaffected Partner Perspective”. This topic was even better personally because as someone who does not have the HD gene it was great to hear 3 different stories and perspectives from people who are also not affected genetically. There was one speaker who was a parent to someone who is HD positive, one speaker whose partner is HD positive and one speaker who is HD negative. They all spoke about how it affects them, how they stay involved, the difficulties involved and so on. They provided separate support groups afterward targeting youth, young adults and adults. In the evening they held their HDSA Awards Dinner and Gala. The Gala was fantastic, they taped up all the stars from the previous day’s lunch, and they had balloons, wine, a red carpet and a spot to take pictures if we wanted. During dinner they had 2 speakers presenting several different awards and played a couple different videos. It was at this time where they announced with 5 winners of the decorated stars. After the awards and dinner were finished they had a moment of silence for everyone affected by HD present or not which consisted of 12 people lighting a candle and the numbered tables lighting their blue glow sticks at the same time. It was truly a beautiful way to end the ceremony. They completed the day with a dance.

The entire convention was beyond what words can express. I learned so many things about myself, others and HD. I had the opportunity to share my story and to share how I got involved in the HD community through YPAHD and the HSC. I got to hear firsthand by the Doctors themselves about the research and promising future for HD. I got to meet new inspiring human beings and listen to so many different stories. HDSA did an amazing job at having so many different topics of interest for people and were able to exceed their goal of raising $30,000. The HD community is amazing and I was overwhelmed with love and gratitude the entire time I was there. I am so appreciative and honoured to have had the privilege to attend this convention and I am beyond excited to attend the YPAHD convention in Kelowna this coming November.

On behalf of all of us within the HD community, from the bottom of our hearts, we thank you sincerely for every single opportunity that HSC has given us. You are the reason that makes living with HD in our lives a little less terrible.

Youth Affected by Huntington Disease to Come Together Across Canada

(Waterloo, ON) November 13, 2019 – As a chapter of the Huntington Society of Canada (HSC), Young People Affected by
Read more