Marty & Jim are tackling the Canadian roads – on their bikes!

Starting in Vancouver on May 14th, 2016, Marty Denonville and Jim Stewart will be biking across Canada to raise funds for Huntington disease.

Long time friends, Marty and Jim, are planning a coast-to-coast ride beginning May 14, right in the middle of Huntington disease (HD) Awareness month – while we #LightItUp4HD! The ride will take about 8-10 weeks and they are hoping to include all of Canada’s provinces.

Marty and Jim see this ride as an exciting athletic challenge, but also as a way of helping bring some hope to people with HD; that there are people who care about them and are willing to help in any number of ways. If they can give any ray of hope to those suffering with HD through their ride, both they, and HSC, will consider it a success!

Learn more about Marty, Jim, and the ride here. 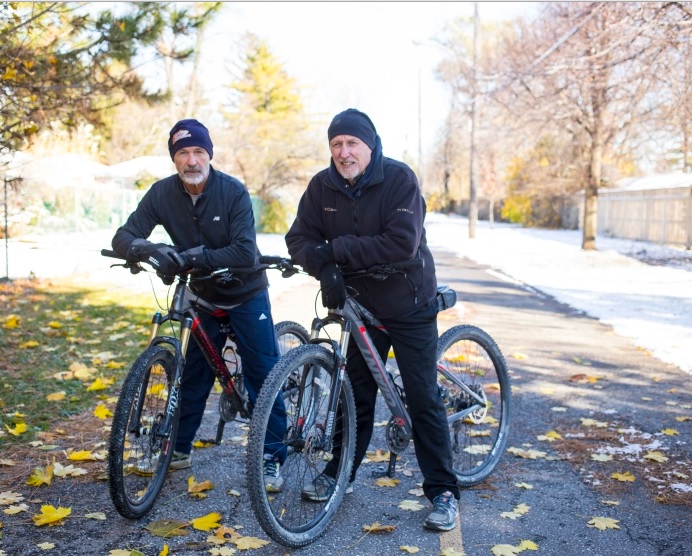 BRITISH COLUMBIA (Mid-May)
Departure from Vancouver: May 14th via Chilliwack, Hope and Merritt
Kamloops on to Salmon Arm, Revelstoke and Golden

ALBERTA (Late May)
Including: Banff and Canmore to Calgary, continuing on through Chestermere, Brooks and Medicine Hat

SASKATCHEWAN (Late May)
Including: Swift Current and Moose Jaw to Regina

MANITOBA (Early June)
Including: Brandon to Portage la Prairie and on to Winnipeg

ONTARIO (Mid to Late June)
Including: Kenora, Dryden, Thunder Bay, Nipigon, Marathon, Wawa, Sault Ste. Marie to Sudbury
North Bay through Algonquin to Huntsville, then on through Pembroke to Ottawa

Marty and Jim’s ride has garnered tons of media attention. To see what newscasters and journalists are saying, check out some previous editions of In the Know, the Huntington Society of Canada’s monthly newsletter highlighting what’s going on in the HD community. Be sure to subscribe so you never miss an update!

Marty Denonville, 63, and Jim Stewart, 62, have been planning to bike cross-Canada and on the way they have been coming across supporters to host events with them. They hosted a spinathon event in late February to raise money for members of the local community with Huntington disease. Read about the event here.

For two local men, a bucket list dream to cycle across Canada has become an emotional journey in finding a meaningful treatment and raising funds for Huntington disease. Read the full story here.

Youth Affected by Huntington Disease to Come Together Across Canada

(Waterloo, ON) November 13, 2019 – As a chapter of the Huntington Society of Canada (HSC), Young People Affected by
Read more