Our Shining Stars virtual tribute wall is a beautiful way to honour people who have been touched in some way by HD.  Honourees include those who are living with HD, who are or have been an inspiration. Some have been honoured who do not have a personal struggle with HD but has made an enduring contribution and commitment to the Society. You may also honour the memory of someone who is no longer with you. Please see our Shining Stars on our Shining Stars Universe, Galaxy and Solar System pages.

We Honour Our Founder 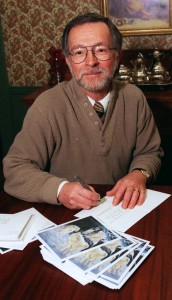 The Huntington disease (HD) community in Canada and around the world lost a great supporter and leader on March 22, 2002, with the death of Ralph Walker.

Moved by compassion to help those who could not help themselves, Ralph and his wife, Ariel, founded the Huntington Society of Canada in 1973. Leaving a successful career in education, Ralph became the Society’s first Executive Director, a position he held for 24 years until his retirement in 1997.

Under Ralph’s leadership, and through his vision, the Huntington Society of Canada has grown from Ralph and Ariel’s kitchen table to an internationally recognized and respected organization, made up of a vital network of volunteers and professionals driving strong programs in research, family services and education. Through hard work and an uncanny ability to connect with people on a very personal level, Ralph almost single-handedly turned the isolation so typical of Huntington disease in the 1970’s into what is now a supportive, motivated community heading into the promise of the 21st Century.

Ralph was known and respected across Canada and around the world for his dedication to the Huntington’s cause, for his expertise, and for his compassion for people throughout the Huntington’s community. For Ralph everything was personal (his handwritten notes were his trademark), and nothing was too much trouble if it helped someone else. His passing brought a response from anyone and everyone who knew him – an outpouring of sadness, support for Ralph’s family, and reflection on the unique contribution he had made.

“For those of you who never had the opportunity to meet Ralph, let me say that no other individual with the exception of Marjorie Guthrie has gone to their rest having made a greater contribution to HD advocacy, services, education or research. Many of the publications families read now here in North America were products of his work, sharing or prompting. I’m certain that each one of us who knew him, as friend or acquaintance, are deeply saddened by this news. Quite literally no one on this planet has worked harder, smarter or longer to realize the vision of a world free of Huntington’s Disease than he did. Rest in peace, brother Ralph. Rest assured we will carry on.” – Jim Pollard, Lowell, MA

Ralph leaves behind a large and loving family, especially his wife and friend of 36 years, Ariel; daughter, Lara and her husband, Tim; son, Matthew and his wife Tori; and five grandchildren.

We owe him a huge debt and continue to miss him.