Throughout the month of May, volunteers across Canada request that buildings in their community fly the Huntington Society of Canada flag for a period of time. The flag raises awareness and honours those affected by the disease.

This movement is organized by volunteers wanting to raise awareness during May, that either may not have a monument or building to light up as part of the National #LightItUp4HD movement, or just to raise additional awareness. 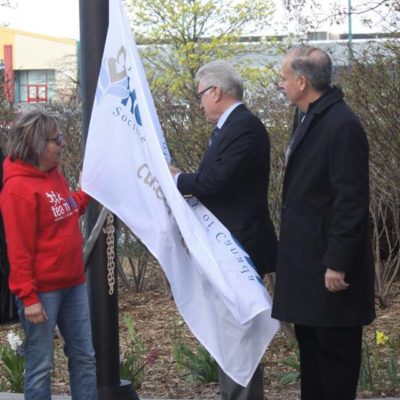 Bunny Clark from Oshawa, ON organizes five flag raisings in her area every year to contribute to May Awareness. “In this area we don’t really have places that can ‘Light It Up’ for us,” says Bunny. “But we still want to raise that awareness so we have the HSC flag flying at administrative buildings every year.”

Along with raising the HD flag, some communities will help raise awareness by officially proclaiming May as Huntington Disease Awareness Month. “The Mayors and Councillors engage personally by reading the proclamation aloud for onlookers, declaring May as official HD Awareness Month,” says Bunny. 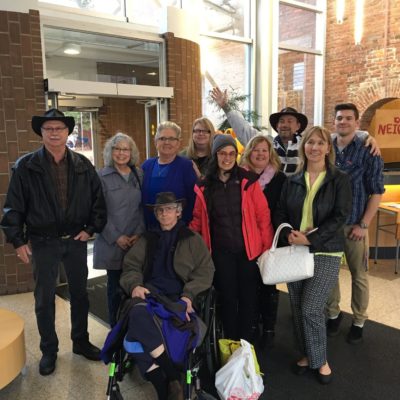 Flag Raising in Victoria, BC

Shena Loganhume from Victoria, BC also organizes her local flag raising as well as lighting up the local legislature building. She emphasizes that no matter how it is achieved, raising awareness is key, “All awareness matters,” says Shena. “It doesn’t matter how small of a group notices, every bit of awareness matters. Maybe one day, HD will be as well-known as some of the other diseases out there.”

For Susan Van Aarsen from London, ON, flag raising in her community has created a rippling effect of awareness. “Since the requests to our City Hall was put in, I have received confirmation that other major buildings in London will follow suit. City Hall will also light up their building and a local fountain in blue and purple,” says Susan. “I will continue to build on this foundation and hope that, in the future, more and more buildings in the London area will help spread this awareness. It’s all about putting the requests out there.”

Click here to see all of the flag raisings happening this month.

Get ready to update your contacts list – there are new phone numbers for the Huntington Society of Canada (HSC) Family Services team, including Resource Centre Directors (RCDS) and Family Services Workers (FSWs).

Please call HSC’s toll-free number at 1-800-998-7398 and you will be connected to the RCD for your geographic area. Or you can use their extension from the following list: www.huntingtonsociety.ca/family-services-team-list/