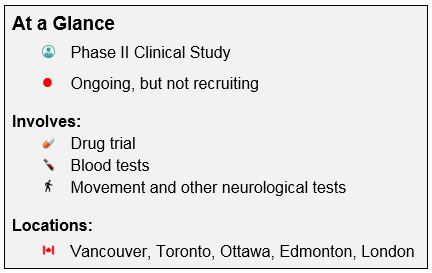 This trial offers continued treatment (involving pridopidine) to HD patients who previously completed the HART or the PRIDE-HD trial including the follow-up period, and remained on drug during the full on treatment part of the trial, and who have wished to continue their treatment.

Status
This study is ongoing, but not recruiting participants.

Purpose
Huntington disease (HD) is a hereditary neurodegenerative disorder causing impairment in movement, behavioral dysfunction and dementia. The movement disorder is mainly characterized by chorea (involuntary movements) and a progressive loss of voluntary movement causing a substantial functional impairment over time. The study will assess the long-term safety of pridopidine and the treatment effects during long-term, open-label treatment.

Exclusion Criteria       (eligibility that would exclude you from this study)

For more detailed information on this study and others and for the most recent updates, please go to clinicaltrials.gov. ClinicalTrials.gov is a registry and results database of publicly and privately supported clinical studies of human participants conducted around the world.