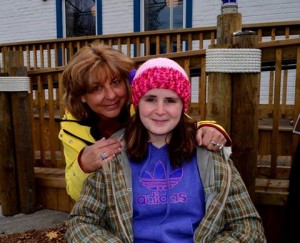 Growing up in Brockville, Ontario, Erin used to be an outgoing teenager. She played rugby, enjoyed bowling and spent time with friends.

When she was 17, however, we received devastating news: Erin was diagnosed with the juvenile form of Huntington disease (HD), a fatal genetic neurodegenerative disorder.

Today, at the age of 22, Erin’s speech is slurred. She has seizures and obsessive-compulsive disorder, and I have to watch her closely when she eats to make sure she doesn’t choke.

I’m doing everything I can to help my daughter. When Erin needed full-time care, I gave up my job to become her caregiver. But I wanted to do more.

Last fall, I was inspired by the ALS Ice Bucket Challenge and launched a Pie in the Face Challenge for HD. Since then, cream pies have been tossed by family, friends, friends of friends, the mayor, the chief of police, the staff at our local fish and chip shop, my former colleagues at Hydro One Perth and many others.

And with each new video of cream-smeared faces posted to Facebook, Erin’s smile gets bigger.

I chose not to end my fundraising efforts there. Last November I organized a bowling event that raised almost $6,000. In February I organized a chili cook-off. I’m also organizing an Elvis show that will take place this June. I plan on doing whatever I can, for as long as I can.

So far I have raised over $10,000 to support highly promising research into HD treatments. I have also created a lot of awareness in Brockville and beyond.

A couple of years ago, nobody knew about this disease in our area. Now they know what Erin has and how it affects her, and she has made some amazing friends.

That support means the world – to both of us.