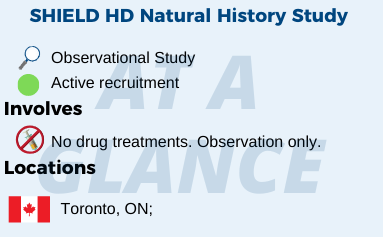 Triplet Therapeutics has developed the SHIELD HD natural history study for Huntington disease (HD), which recently enrolled its first patients. The study will include about 60 HD gene carriers – both pre-manifest and early manifest individuals – and is intended to inform future clinical trials.

If you’re not familiar with Triplet’s therapeutic approach, it’s different from other therapies currently entering the HD clinic, in that it targets a newly discovered set of modifiers for HD instead of the HTT gene. Operating “upstream” means that Triplet may be able to treat the disease very early — an approach that could preserve neuronal function and halt neurodegeneration.

You can see the full press release online here.